RSS
← Past seven days, top fives
I was between blogs at the time… →

I am not going to bore you rigid with a detailed unit plan, but I have to say teachers are well served these days. In my day — as all boring old farts say — I really had to bury myself in a library or break the bank at the book shop. The latter I quite often did when teaching history, my stint teaching Ancient History at Masada being a classic example, of great benefit at the time to Gleebooks and a second-hand bookshop in George Street.

Today, however, we have basic sites like Australian Politics and Google throws up much more. The NSW Board of Studies gives a flying start with Federation 1901, and the prize-winning Making Multicultural Australia resource is excellent. See also here. I would also make use of that wonderful anthology from Black Inc Well May We Say: The Speeches That Made Australia, edited by Sally Warhaft. It includes much that is directly relevant, and the speeches selected do not reflect just one viewpoint either. I find it is just a really good read.

In all that you will find basic speeches and documents, and the first job would be to see what happened and in what order. I would probably begin by asking if anyone has heard of the White Australia Policy, and if so what they understand by it. Almost certainly the word “racist” would come up even at this early stage. I would say, “Hang on; that’s what we think now. Is that all it was? Did the people at the time see it that way? Why did they think — and they obviously did — that it was a good idea, so good that it was one of the first things the new Commonwealth of Australia did? What other problems were they trying to address?” 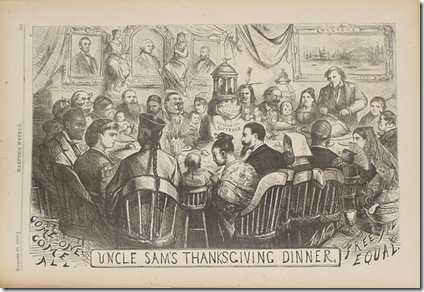 This cartoon from the US magazine Harpers by Thomas Nast (1880s) has been charged with showing a racist, anti-immigrant spirit. Does it? I can’t help but think that “Hop”of the Bulletin may have seen it. His cartoon I think we would today see as undeniably racist, but on Nast see this blog entry. The cartoon on the right is from the London Punch.

I explained a little about my politics and attitude to history in November 2007.

I sympathise very much with the position taken by After the Victorians by A N Wilson.

[I]n the years when other countries of the world had their civil wars, their Gulags, their Dachaus, and their Kristallnachts, it was the conservative, monarchical aristocratic Britain which maintained a political idea of personalized freedom, not merely for its own citizens, but also for foreign refugees to its shores and those in other lands who fought for freedom.

In context he is opposing the evolved Westminster system, which is also our heritage in Australia — a heritage I value, to the doctrine and practice of revolution. What that system has delivered is a rule of law, imperfect as it may be at times, and an ability to adapt with minimal pain and unintended consequences. I really believe in that. To that degree I am conservative. It may well be, too, that this is a large part of what Jim Belshaw and I have in common.

I would add another review to that. This is a book I have been browsing for months now, and I admire its honest subjectivity, which is not to say it is careless with facts! There is an especially telling note in Wilson’s chapter on the Spanish Civil War and the events leading to World War 2. Aside from his recourse to the right wing cliche — pure name-calling — of a “Race Relations industry” which I suggests belittles something that in fact is generally an advance and a social good, I do take his point and essentially agree. This would be at the back of my mind as I led students through the minefield of White Australia. I would also have on hand David Malouf’s Made in England, referred to in a post here last week.

… Before an English person narrates such a story, it is perhaps worth saying that, of course, the whole climate of opinion has altered in the years since the Second World War. What is now called ‘political correctness’ was unknown, as was the Race Relations industry. Throughout the British Empire, an effectual apartheid operated which was social as much as racial. (Indian and Malay princes were treated like white men.) Ordinary ‘natives’, whether Indian, Malay or Chinese, or African, were not educated at the same schools, or entertained at the same restaurants and clubs as Europeans. In the United States, blacks and whites were still segregated in all the southern states, and for social purposes in the northern ones as well. These things, to those who live in a post-Nazi era, strike us as bizarre, as well as distasteful. I repeat my anecdote in the consciousness that it will sound smug, but I am sure it is true. It was told to me by one of those soldiers in the prisoner-of-war camp where it happened, and I am sure that every one of those soldiers — certainly the one who told it me — would have been ‘politically incorrect’, made jokes which sound to us racist, or very likely raised an eyebrow if an Indian was offered a drink at the bar, or a Jew proposed for the golf club. I tell the story not to suggest that the British were saints and the Germans all sinners, but to suggest that there was a strong sense of decency in these men; and that they were aware, long before the Holocaust began, and long before the full extent of the atrocities had been r
evealed, that Hitler had crossed the bounds of decency.

The story, told by poet John Buxton, is of a group of PoWs in 1940. When asked (very politely) by the SS that all Jewish PoWs should step forward — for “administrative purposes” — the entire group of prisoners took three paces forward. I guess you see why…

All that does not actually answer the question: Was the White Australia Policy racist? It very clearly was. What it does invite us to do, however, is to think twice how we apply such judgments retrospectively. And does it mean Australians are racist? As I’ve said before, no more than anyone else. Evil as I am, I am actually proposing a healthy relativism, as I would in any cross-cultural encounter. Because then and now, while having continuities, are different times, different contexts, different cultural settings.

If students were really good, I might get them (as an extension activity) to read and evaluate Keith Windschuttle on the subject… 😉

It was still acceptable in 1969 to have as the topic in a Sutherland Shire Regional Debating Final “That Australia’s Future is White.” My team had the affirmative and won, perhaps dubiously, with the line that the racial mix in Australia was irrelevant because any form of political complexion the country would have would be “white” as all those systems had originated in Europe. We were unaware then, of course, of political Islam, but even that, many would argue, owes as much to such European concepts as Leninism as it does to the Qu’ran or Muslim tradition…

← Past seven days, top fives
I was between blogs at the time… →

4 responses to “That hypothetical Year 10 lesson on "White Australia"”