As I said when I mentioned this a few days ago, M worked at the Oasis for a year or two. So I had heard a bit about it, and of course I see the place often enough, and some of the faces I have seen quite often.

I am in awe, though, at what I saw. Did you see it? I mean, really what can anyone say that is adequate?

Just go and see for yourself. 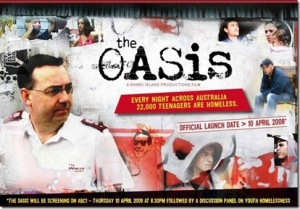 Good to see our local Member of Parliament, now Minister in charge of these matters, whose electoral office is opposite The Oasis. Good to think there is every chance we now have a government that is, it appears, determined to do something. Any way we can, let’s encourage and support them.

END_OF_DOCUMENT_TOKEN_TO_BE_REPLACED

Comments Off on Oasis watched

I have mentioned Father Brian Stoney and the Cana Community several times, most recently on Induction of Andrew Collis, South Sydney Uniting Church. I see that on Sunday Encounter on Radio National has a program about them.

Recently Kevin Rudd sent his ministers onto the streets so they could glimpse what life might be like for homeless people. Well, what happens if you go one step further and build relationships with the most rejected and powerless members of our society: those who are mentally ill, or addicted or are recently out of prison. To find out we spend a day with a community, called Cana, that is doing just that.

END_OF_DOCUMENT_TOKEN_TO_BE_REPLACED

Comments Off on Cana Community on Radio National

Admit your sins to the Lord, priest tells gay judge

I think rector of St Stephen’s Church in Bellevue Hill, the Reverend Richard Lane, would probably grit his teeth at the word “priest”, being a Sydney Anglican of the Reformed or Calvinist persuasion, I would have thought, and obviously a devout believer in the Bible as the revealed Word of God, though perhaps not a fundamentalist of the American kind. Yes, I know these are subtle distinctions that will escape the notice of many readers, but in courtesy to Richard Lane I mention them.

And that is where courtesy tends to reach its limit, because even allowing for the possibility that the Sydney Morning Herald has been understandably obtuse in reporting all this, Richard Lane does, sadly, demonstrate where believing God writes or dictates books that are valid for all times and all circumstances leads one. Into absurdity.

END_OF_DOCUMENT_TOKEN_TO_BE_REPLACED

I’ll be dead by then of course…

Very likely even before, but I almost certainly won’t live to see it fulfilled — though some of my readers may. If it is fulfilled of course, as it strikes me as a blend of vision, pipe-dream and practicality. Time and money will no doubt sort it.

I mention it because Clover has placed a very tasteful poster on the bus stop here in Elizabeth Street, with no doubt similars all over the city. To see what it is all about, go to Sustainable Sydney 2030.

Comments Off on I’ll be dead by then of course…