NSW Police, acting on complaints by Interested Citizens, are on the point of cracking Child Pornographer William Shakespeare. “I have never heard anything so disgusting in my life,” Prime Minister Rudd told Good Morning Australia.

“But I was disgusted long before Kevin Rudd, and no child will have to pay for petrol under a Coalition Government,” responded Opposition Leader Brendan Nelson on Sunrise.

Shakespeare — not to be confused with Australian singer Johnny Cabe whose suggestive lyrics (see the YouTube) do explain his choice of “William Shakespeare” as a stage name — has been foisting his filth on impressionable young Australians for years, informed sources say.

Aside from a series of alleged artworks featuring cross-dressing and sexual confusion, he is most notorious for his celebration of teenage sex in Romeo and Juliet, a tale of “love” between a sixteen-year-old boy and a thirteen-year-old girl.

“This play positively glamorises disrespect for and disobedience of parents and includes scenes of necrophilia and drug-taking,” morals crusader Betty Johanson told ABC Radio National last night. “Would you allow your daughter to appear in such a perverse exhibition?”

On learning that Shakespeare had originally planned for the part of Juliet to be played by a thirteen-year-old boy, Johanson swore not to rest until this evil influence was under lock and key where he belonged. 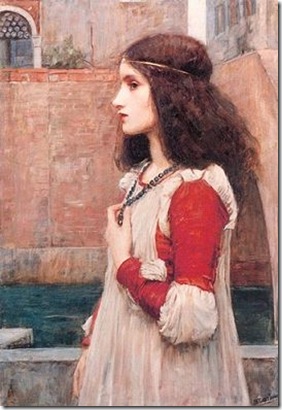 Defenders of Shakespeare’s work who claim such relationships were common in older times are wrong. “The average age of marriage in the period was actually higher than today, though in noble households children were sometimes married younger for reasons of the estate,” an expert on the period states.

A contemporary of Shakespeare sees even darker elements at work. The stage, he writes, was the cause of the visitations of the plague: when it was not present the ungodliness of the plays brought it on as a curse from heaven; and when it was present, the gathering in the playhouse caused it to spread.

Kevin Rudd meanwhile pointed out that Romeo and Juliet was studied all over the country — in fact by thirteen-year-old girls — all through the years of the Howard government. “Let Brendan Nelson explain that,” he told a radio 2GB audience this morning. “The Howard government sat on its hands and did nothing for almost as long as poor Juliet (right) was alive.”

Sydney’s Cardinal George Pell angrily rejected traditions that say the Blessed Virgin Mary was fourteen years old, despite other Catholics saying this may indeed have been the case:

We do not know exactly how old Mary was when she gave birth to Jesus. The Catholic Encyclopedia states, “From the age at which Hebrew maidens became marriageable, it is possible that Mary gave birth to her Son when she was about thirteen or fourteen years of age. No historical document tells us how old she actually was at the time of the Nativity.” Also, “Jewish maidens were considered marriageable at the age of twelve years and six months, though the actual age of the bride varied with circumstances. The marriage was preceded by the betrothal, after which the bride legally belonged to the bridegroom, though she did not live with him till about a year later, when the marriage used to be celebrated.”

Cardinal Pell said no-one should get the wrong idea about what “World Youth Day” actually means. “This is not an endorsement of the filth to be found in depraved works like Romeo and Juliet,” Pell told Alan Jones this morning on 2GB. Jones agreed that none of us should get any wrong ideas about teenage boys, or even girls. “What is this world coming to?” Jones complained. “Let kids be kids,” he continued, before launching into a segment on the latest in pre-teen designer label fashion.

Coetzee said yesterday that he was concerned about censorship and joined the criticism of Kevin Rudd’s labelling of Shakespeare’s work as “revolting” and “devoid of artistic merit”.

“Nothing he said led me to actually believe he had given proper thought to the questions at stake, which are actually quite subtle and complex,” said Coetzee.

Arts Minister Peter Garrett is said to be in hiding, last seen muttering about strange cargoes.

Related but not satirical

…Second, I know Hetty Johnson personally – she’s also from Logan City originally – and she served the city with considerable distinction, first as local councillor (Democrats, then independent) and then as a child protection advocate. I find it difficult to imagine her going off half-cocked. Maybe she has changed since I knew her, or allowed herself to be embroiled in a moral panic of sorts. People involved in child protection – in part because child sexual abuse really is distressingly common, especially in step-family arrangements – do get very wound up about what they do, and anything that appears to legitimize it. The situation is awkward, especially as Henson’s photographs depend on the viewer’s gaze, rather than anything intrinsic. A paedophile, unfortunately, will get off on them. That said, a paedophile will also get off on the Bonds underwear catalogue….

Indeed: or even get off on Gumnut Babies…

Such strange bedfellows is this kerfuffle producing, if you will forgive the “bedfellow” metaphor… For example, how often would I agree with David Barnett? 😉

…Kids, especially primary kids, need affection and like cuddles. That’s a no no. But how do you stop a nine year old friend of your kids who has known you for half her life from giving you a hug? Even swinging kids around in the play ground can, as it did in my case, lead to someone calling you a pervert.

It all makes things very hard.

…KERRY O’BRIEN: And ABC1 will broadcast the documentary on “The Art of Bill Henson” tonight at 10 o’clock.

See what WordPress bloggers are saying about Bill Henson. I was interested to note this from James O’Brien:

I’d arranged to meet The Other Andrew at Edgecliff Station, ahead of going to the Roslyn Oxley Gallery to see the latest Bill Henson exhibition. At the momenmt, Henson is probably Australia’s greatest art-photographer, though he invites controversy as his work often includes photographs of adolescent nudes.

I’d been to the retrospective of his work at the Art Gallery of NSW, and I’d been to an exhibition of his work at Roslyn Oxley a couple of years ago. Even then, there was a considerable debate about whether or not his work crossed the line between art and pornography. Chatting with a former colleague with a strong interest in fine art yesterday, she told me she had seen the work and thought this time around he had crossed the line.

I have had a good look round on the net and have now seen quite a few of Henson’s images, including all those currently on the Roslyn Oxley Gallery site. Not there but elsewhere I did find one that I personally would regard as pornographic, but there are a number that push the edge. I do prefer photography that is less self-consciously “arty”, I must say, but that is a matter of personal taste. I still can’t imagine hordes of pedophiles seeking them out to get their jollies, not when so much more obvious sources are available…

See also 10. But is it art? Responses to the Bill Henson controversy of 2008. See too Age of consent on Larvatus Prodeo.

Also worth a look: The Stir Over Bill Henson’s Nudes — Paul Sunstone, from Front Range of the Rockies, near Cheyenne Mountain.