Q&A | ABC TV is on right now and the highlight so far has been Andrew Bolt grappling with a REAL SCIENTIST and making a total goose of himself, on the matter of the amount of ice in the world, for example, and what is happening in Antarctica… See also Real Climate on Skeptics. Seems to believe in the so-called Global Warming Petition Project with its much touted “31,072 American scientists have signed this petition.” He quotes this as if it had some real weight. However, see Oregon Institute of Science and Malarkey on the background and the shonkiness of this, and also see Sourcewatch. Andrew Bolt on this one may as well admit to believing in fairies…

I have a question. How come when we, or the Liberal Party, talk of not doing anything about climate change until everyone is on board, that everyone seems to forget New Zealand? I am truly puzzled by this. Click the banner below:

END_OF_DOCUMENT_TOKEN_TO_BE_REPLACED

My idea for The South Sydney Herald

It is just an idea which I raised with Andrew Collis the other day; whether The South Sydney Herald takes it up is another matter altogether. Depends on how it fits with their current mix.*

However, I thought I’d let you see what I submitted.

END_OF_DOCUMENT_TOKEN_TO_BE_REPLACED

Comments Off on My idea for The South Sydney Herald

So intent is he on his crusade against Reds in The Bed that he seems to ignore the real child involved, in fact goes on grossly to smear her family:

What we have seen in recent weeks is an arrogance and aloofness from an arts community that cannot find within itself any sympathy for the views of the general community. No other community holds such an elitist view of its own worth.

As young Olympia may learn as she grows older and looks back upon her exploitation by a Left-wing clique, you can pick your nose and pick your friends, but you can’t pick your parents.

I am sure Piers is an excellent nose-picker, and I am glad he isn’t my dad, if we must descend to that level.

And Piers: go wank over this —

END_OF_DOCUMENT_TOKEN_TO_BE_REPLACED

That VodPod, which also lives on  Floating Life Apr 06-Nov 07, gives some clues about the DVDs I currently have out from Surry Hills Library.

What can you say? Of course it is brilliant, but also such a study of how mores and class attitudes have changed since it was made. I thoroughly enjoyed seeing it again.

This Billy Wilder movie was made the year I was born, so that is kind of appropriate.

A British tank commander (Franchot Tone) survives a battle with Erwin Rommel’s Afrika Korps in the North African desert. He finds sanctuary in a small desert hotel owned by Farid (Akim Tamiroff). The staff consists of just Mouche (Anne Baxter), but is augmented by “Davos”, the identity that Corporal John Bramble assumes. At first hostile and cynical, Mouche gradually falls in love with the newcomer.

Complications arise when the Germans take over the hotel to use as headquarters for Field Marshal Rommel (Erich von Stroheim). Davos is mistaken by the Germans for one of their local spies and he makes use of this fortuitous mistake to steal some vital military information, the locations of the “Five Graves to Cairo”, hidden buried fuel dumps prepared before the war for the conquest of Egypt. He takes that knowledge to the British, who use it to thwart Rommel’s plans.

When Bramble returns in triumph to the hotel, he is devastated to learn that the Germans had executed Mouche in his absence because she wouldn’t stop saying that the British would be back. He takes the parasol he had bought for her, something she had always wanted, and uses it to provide shade for her grave.

A contemporary review from The New York Times (May 27, 1943) is rather amusing.

It’s a good thing the German armies and Field Marshal Rommel in particular had been chased all the way out of Africa before “Five Graves to Cairo” opened at the Paramount yesterday, else the performance by Erich von Stroheim of the much-touted field marshal in it might have been just a bit too aggressive for the comfort of most of us…

Completely out of key with the performance of Mr. von Stroheim is the rest of “Five Graves to Cairo.” For otherwise it is simply an incredible comedy-melodrama—yes, comedy is what we said—about a British tank-corps corporal who gets left behind in Sidi Halfaya (when the British retreated last June), poses as a loyal German agent in the flea-bag hotel which Rommel’s staff occupies, learns the amazing secret of German supply depots set lip before the war across the desert—and then escapes with that secret back to the British lines. This remarkable information (it says here) permitted the rout of the Axis forces at El Alamein.

As though this fanciful story weren’t sufficiently hard to take, Charles Brackett and Billy Wilder, a couple of old-hand Paramount wags, have dressed it up with shenanigans which have the flavor of fun in a haunted house. Akim Tamiroff plays an Egyptian innkeeper broadly and strictly for laughs, and Fortunio Bonanova is rung in as an Italian general of the opéra-bouffe type. With those two clowns in the picture, fetching laughs with smoke-house burlesque; with Franchot Tone playing the British corporal in a taut and muted style and with Mr. von Stroheim playing Rommel with a realism that chills the bones—not to mention a little side issue between Peter Van Eyck as a Nazi officer and Anne Baxter as an expatriate French maid — “Five Graves to Cairo” is probably the most conglomerate war film to date. It has a little something for all tastes, provided you don’t give a darn.

Today we might note the postcolonial aspects of the characterisation of “others”, especially the Egyptian, which while actually quite well done in its way (in my opinion) does bear some resemblance to the comic black people who populated movies in those days…

Nonetheless, it is a movie worth seeing. 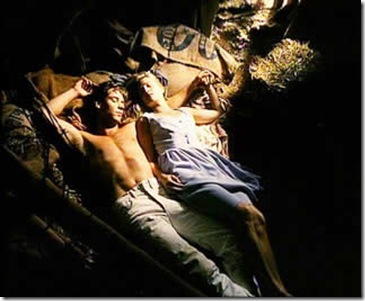 This 1990 Australian movie is not half bad, actually. It features a much younger Russell Crowe (aged 25) and Danielle Spencer,  whom he went on to marry in 2003. That’s them in a still from the movie. The other male lead was Robert Mammone, last seen on TV in Underbelly.

I found the fact it was filmed in Condobolin and Junee most interesting, as it was a reminder of how those towns looked just before the years of drought, especially the countryside around Condobolin.

The movie is set in the Vietnam War era (late 1960s) on Anzac Day. It certainly took me back to the way people looked, dressed, and thought at the time I began my teaching career.

The Sydney Morning Herald critic Linden Barber reviewed it in 1990:

JUST lately, teen films seem to have been raised as the standard bearers of the mainstream end of the Australian film industry. It would be easy to construct a theory about this, arguing that it subconsciously reflects the nation’s own adolescence, its alliance of painful self-consciousness and freshness-cum-naivety.

On the other hand, perhaps a few producers have simply decided that teen movies are surefire earners.

The romantic drama The Crossing is certainly a noble effort, coming in several furlongs ahead of the artless The Delinquents, but its falls some way behind The Year My Voice Broke, the film with which it invites the most obvious comparison. Set over a period of 24 hours in a country town on Anzac Day, it’s based around a young lovers’ triangle, and nearly comes off. What prevents it from doing so is its erratic casting and a certain stylistic over-ambition.

Danielle Spencer and Russell Crowe display a touching tenderness as the lovers (along with the sophisticated pop soundtrack, they’re the best thing about the film), but Robert Mammone is shaky as Spencer’s ex-boyfriend, who has just returned to town, and some of the supporting roles are unconvincing. And while Jeff Darling’s AFI award-winning cinematography has some impressive moments (the opening scenes, filmed at a dawn Anzac service, are stunning), it soon becomes irritatingly over-stylised, too often flooding the action in the golden glow of a sugar cane commercial.

The Crossing, then, is a little too eager to impress. Take the way it works in elements from Rebel Without a Cause and High Noon – a chicken-run car chase (done better in John Waters’s Cry Baby), an over-abundance of lengthening shadows and shots of clocks. It keeps drawing attention to its own cleverness.

Everything in the film is orchestrated to build to a grand climax, but director George Ogilvie doesn’t quite get the film’s rhythms right. A pity, because there’s a good-natured centre to The Crossing that makes you want to like it, despite the flaws.

“…But the true revelation is Crowe, in his first major film role. In most movies like this one, the boyfriend/fiancé/husband is usually either an overbearing jerk who causes the heroine much unhappiness, or an annoying sap whose constant declarations of love sound laughingly hollow. But when Johnny professes his love for Meg, it’s clear that he means it. And when he is threatened with losing her, he reacts not with physical violence or menace, but instead seems to unravel at his own emotional seams. Crowe takes a character that could have been one-note and creates one who is masculine and practical, yet sensitive enough to know that his way of life is in danger and there’s really nothing he can do about it.”

That’s a pretty fair review, especially the paragraph I highlighted. Nonetheless, I am glad I borrowed it.

4. Tears of the Black Tiger

To quote Wikipedia, linked at the title above: END_OF_DOCUMENT_TOKEN_TO_BE_REPLACED

Comments Off on ninglun’s dvds – Videos about Doctor Who, Bloody Sunday, Swimming Upstream…