Robert Gray is one of my favourite contemporary Australian poets.

END_OF_DOCUMENT_TOKEN_TO_BE_REPLACED

Posted by Neil on July 18, 2008 in Australia, Australia and Australian, poets and poetry 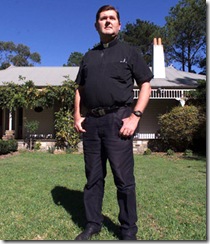 Catholic Church sex abuse investigations ‘a joke’ | NEWS.com.au is a most interesting story, coming as it does not from outside but from inside the Catholic Church, from Father Chris Riley, a kind of living Mary McKillop in my book and as troublesome perhaps as she was in life.

THE Catholic Church should scrap its program to investigate sex abuse within the church because victims have been denied justice, a maverick Sydney priest says.

Father Chris Riley [right], who heads Youth Off The Streets, a Sydney welfare service that assists homeless, drug addicted and abused young people, said the Towards Healing program hurt the church’s credibility and meant victims often did not have their day in court.
He told the Nine Network tonight that any family confronted with sexual abuse should go straight to the police and have the matter dealt with in court.
“Towards Healing, to me, I have to say, is a joke,” he said.
“The perpetrator is the only winner there because often they are not charged, because it (the case) is settled.
“This is obscene, settling those sort of cases behind closed doors,” Father Riley said.
“It should be out in the court, and then if they (victims) want to deal with the church, we then do that after the person is … found guilty, and my position is, jailed for a long time.
“Then, if they want to go to the church, let’s heal them then, but get justice first.”

Visit Youth Off The Streets via the logo on the left.

Last night’s Q&A on ABC1 featured “former Foreign Affairs Minister, Alexander Downer, Minister for Finance, Lindsay Tanner, author, journalist and critic of the Howard government, David Marr, columnist, Angela Shanahan and rising star of Young Labor, Rose Jackson.” Inevitably it became something of a forum on faith, politics, and reason. I won’t bother to go into it much here, but do commend you visit the program and even watch it if you can. I must say I have never actually read Angela Shanahan, and don’t think I will after her performance last night. I also found Alexander Downer’s attitude to the church quite puzzling, though it is not an uncommon position. He is clearly uncomfortable with theological honesty.

David Marr’s passionate response to Angela Shanahan’s parroting of traditional dogma on GLBT people certainly scored with me, even if I do worry that his somewhat patrician delivery would alienate quite a few punters; still, he can’t help being in his own way just as “posh” as Downer. Lindsay Tanner was good; Rose Jackson embarrassingly got her Pavlovs and pavlovas mixed up and will, I hope, outgrow her school debating style.

I should add that so far as my own church is concerned David Marr would have expressed most nearly what we believe.