So now I have seen the second program…

You may recall I said I regarded two this week as “must see”. Tonight’s was even more must see, in my opinion, than Monday’s, and by any sane standards or values far more worth while, far more substantial, far more significant than the much hyped Australia – though that I have not seen. I am just saying that in principle a campy fantasy Australia on which probably obscene amounts of money have already been spent is, when you come down to it, more than a little questionable. Yes, I know that will seem rather puritan, is a comparison of apples and oranges, and it may just be my passing mood. If I do see Australia I may well find much to enjoy in it.

It is a fact, however, that tonight’s A Well Founded Fear was not only a very well-made film, but an utterly devastating experience, which ought to be spliced into next week’s Howard Years as a balance to the same old same old that some will no doubt come up with. Indeed, imagine them running split screen! What a juxtaposition that would be!

The depths to which we fell in those years on the matter of refugee policy infuriated and shamed me at the time, but there were things shown tonight – let’s call it government and official duplicity and that is to soften things – which I didn’t know, and I am sure few of us did. Deporting people with false one-way passports to countries they hadn’t even come from, for example. And in case that is ambiguous, it was our Immigration Department involved in the false passports.

It was, fortunately, not only devastating. The sheer decency of those who care, who made the film or caused it to be made, and the sheer courage and decency of many of our rejects – all those gave cause for hope.

May people on the Opposition side like Petro Georgiou be strengthened in what they are doing, and may Kevin Rudd and company do even more – and they have done quite a lot – to undo this despicable legacy of the Howard Years.

I make no apology for the epithets I have chosen. They are the most accurate in the lexicon for the perpetrators and for their craven publicists and apologists in the media.

Little Fish (2005) is an Australian film which may well also be more significant, in real terms, than Australia – and it is a feature film too, not a documentary. I haven’t seen it but recall people who did praising it highly. It is on ABC on Sunday night. And it has Cate Blanchett, Sam Neill and Hugo Weaving….

I should add, too, that while A Well Founded Fear was harrowing and evoked some rage in me, as you saw, it was also very inspiring. Full marks to the Edmund Rice Centre and Phil Glendenning, just a marvellous human being. Go there and you will find you can do something about the issue!

No, not for Baz Luhrmann’s Australia*, but for something even more parochial… 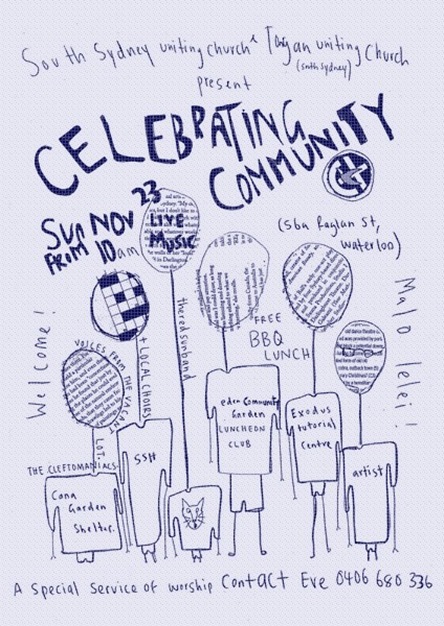 "Celebrating Community" service, lunch (vegetarian options) and live music event this Sunday — service at 10am and/or  lunch from 11.45am. 56a Raglan Street, Waterloo.

* “No fewer than 15 babies were born to cast and crew, one being Kidman’s daughter, during the course of the very long filming.” IMDB.

Comments Off on Shameless plug time