And that is as far as you get…

Called over to M’s this morning… 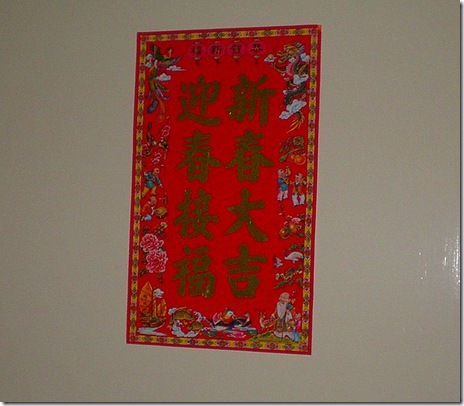 …and this is on his door, but that is as far as we go.

Then I went to SBHS, not far away, just as a social call. But I thought I would collect something for Jim Belshaw…

I also caught a bit of Old Sydney for Ninglun’s Specials, but you can go there to see that.

You will be very tempted by anyone claiming to have invented an Education Thermometer which, when stuck up the patient’s fundament, will magically tell you just what’s wrong and how to fix it. The more amazing numbers on that thermometer and the more it flashes and whirs the more politicians, bureaucrats and parents believe in its powers…

1. Go to Fair Test if you must look to the USA, and admittedly there is much there to be noted…

2. Don’t pay too much mind to Rupert Murdoch.

As a retired administrative analyst, who worked for the New York City public schools for 33 years–mainly in the area of testing, I call attention to the manner in which Chancellor Klein has used the annual testing program to present an exaggerated politically-motivated picture of the system’s "progress" under his (and Mayor Bloomberg’s) administration. An educational leader should be concerned with the implementation of meaningful testing procedures and the truthful presentation of data to evaluate the status of student achievement. Chancellor Klein has failed to pass both of these tests.

The misleading reporting of the 2005 reading (English Language Arts) test scores is a case in point. This was the year in which the mayor was seeking reelection. Having obtained control of the school system (which prior to the advent of Mr. Bloomberg was a non-mayoral agency governed by a board of education), he appointed Mr. Klein to run the system and pledged that test results would improve. In 2005, at the outset of the election campaign, they jointly and conspicuously announced that 4th grade student achievement had increased by 10%–an astonishing accomplishment.

After I FOILed for data pertinent to these results (and waited nine months to receive the data–long after the mayor had won his second term), I was able to analyze two unacknowledged factors that went into the increase: Over 5,000 students had been excluded from the test population. They consisted of 3rd graders who were held back in 2005 and didn’t take the 4th grade test, as well as a larger than usual number of students classified as Limited English Proficiency.

The net effect was to remove thousands of low-scoring students who, in prior years (such as, 2004) would have been included.

4. Read this letter from an English teacher here in Oz:

Jennifer Buckingham argues that New York’s system of school performance reporting is a success because "schools given F and D grades improved performance substantially the next year" ("Every good parent deserves truth", November 20).

This is the phenomenon known as regression to the mean. Schools that have unusually low or high rankings are more likely to move towards the middle the following year.

This pattern indicates that the system is not measuring the actual worth of a school but just natural random fluctuations in the performance of students.

You would get the same effect if you measured students’ average height. Schools with unusually short students would tend to have taller students the next year. But it seems unlikely that measuring children makes them grow.

Schools occasionally have high or low end-of-year results. As teachers, we cannot control all the factors that lead to these results. Nor should we try. Time we spend chasing a single year’s result on a particular assessment is time we do not spend planning for long-term change and improvement.

There are all kinds of factors that can affect a single year’s result. Was there a big party the night before the NAPLAN (National Assessment Program – Literacy and Numeracy) testing? Did a family of five hard-working siblings arrive at the school? Did a talented learning support assistant get her Diploma of Education and move to another school? Did the school decide to have a spelling bee this year?

As an English teacher, if I wanted to make my life easy all I would teach would be spelling and grammar. All my assessments would be in exam format. My marking would be done in minutes. But I know that if I do that I will never be able to assess students on certain essential skills. These include the ability to speak publicly, to research ideas in depth and to plan and redraft a piece of writing to publication standard.

Joel Klein is in Australia to "spruik" his business-friendly school reforms courtesy of the giant Swiss bank UBS, the recipient of a multibillion-dollar bail-out from Swiss taxpayers, and dubbed the "world’s biggest subprime loser" by The Age.

The federal Education Minister, Julia Gillard, "welcomes the active involvement of UBS" in education reform. Since her recent US visit, she has been championing the "remarkable outcomes" she claims Klein has achieved in New York, where he is the chancellor of the city’s education department.

Klein, who was previously chief executive of the international media company Bertelsmann (and who had an article on this page on Monday), believes schools should be run more like businesses, and is an enthusiastic promoter of "charter" schools, some of which are operated for profit. He told Fortune magazine, "We’re converting the role of the principal into a CEO role."…

6. Take note of my late Aunt Beth. She was an Infants teacher of many years standing, and in her time a pioneer of such literacy initiatives as the Hallidayan “Breakthrough to Literacy”. In the last conversation I had with her on the subject – and in fact The Rabbit was present and may recall this – she said, in relation to the way her grandchild was being taught, that it would be a good idea if we stopped all this testing and measuring and got back to teaching… There may well be a clue there for your education revolution.

Comments Off on Memo to Julie Gillard and Kevin Rudd