Good news on the Cricket…

It’s the Boxing Day Test Match in Melbourne, v. South Africa. We lost the first Test in Perth. This is panning out to be a good game. But of course the good news really is that I can watch the game as our aberrant shared TV antenna has now been fixed, so Channel Nine is visible again, as you can see….

At that point in the game Kevin Rudd, our PM, was doing his bit in the commentary box. Soon after South Africa lost their second wicket. They’re 2/43 as I write this.

8.3 Johnson to Amla, no run, OUT, smacked extremely hard straight into the chest of Symonds at gully, who manages to cling onto the catch

Australia had managed to rack up 394 in their first innings.

What a partnership this has been! Surely one of the great ones of test cricket. This J P Duminy person is quite amazing.

And the next day

Australia is now (4pm) in, doing well but probably not well enough, though you never know. The excitement at the moment is waiting for Ponting to get his 100…. Oz now has 200 up… Bowler now is Morne Morkel – quite a name that… Peter Roebuck was pretty scathing in the Herald today: Gloom and Duminy. Ponting now on 98… Not much out of that over. Harris now bowling… Well… Maiden over… 7/201… Morkel’s bowling again…. Mitchell Johnson (right) is on strike. He just got a four! 7/205… Then a single… 7/206… New ball, Harris bowling… So Johnson is still on strike – that means batting, by the way… Not “on strike” in any other sense… 4.18pm. Over ended, with Johnson getting a four, bringing Oz up to 7/210, and Ponting on strike. Forty minutes he’s been in the 90s. Morkel bowls. Ponting gets a single: 99! Johnson gets a single, so Ponting is back on strike… The people in the ground erupt… And then tragedy! Ponting has just been bowled by Morkel for 99!!!!

Comments Off on Good news on the Cricket…

Shortly I will go stats crazy as both the end of the month and the end of the year are coming up. Today I will post the top individually visited posts in the past seven days for each of the three main Floating Life blogs.

Comments Off on Quick Saturday stats

I went there earlier this year to take some pictures for The South Sydney Herald. As it happens, the pics haven’t been used, but I was glad to have had the assignment. I don’t have all that much direct experience of The Wayside Chapel, a sometimes contentious part of The Uniting Church, but one of my South Sydney colleagues, Blair, is a regular volunteer there. Just about everyone in Sydney knows of its work. 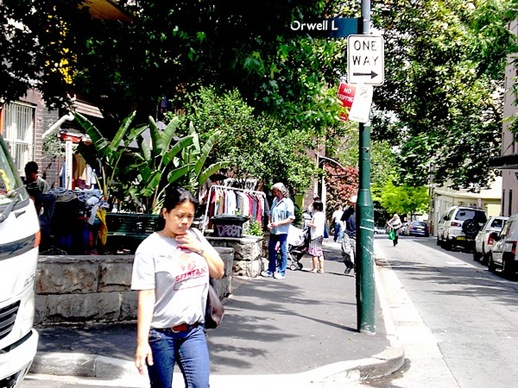 The Wayside Chapel: photo by Neil

The pastor, Graham Long, has lately appeared from time to time in the press as David Hicks’s mentor/counsellor. There is a South Australian connection, which emerges in a good profile feature in today’s Sydney Morning Herald: Let he who has not sinned ….

Long, 57, has been in charge of the Wayside Chapel in Hughes Street, Potts Point for four years, though he was only confirmed as a Uniting Church pastor this month. He is the third controversial man to lead the Wayside Chapel in the past 44 years. Noffs was a charismatic pioneer, whose influence and innovations were felt worldwide. Ray Richmond served for 13 years and opened Sydney’s first illegal drug injecting room, leading to a criminal charge that was later dropped.

An avuncular, bearded figure with a raucous and ready laugh, Long might appear a safer choice: a less heroic but more practical administrator capable of steering the organisation from near insolvency to financial health, and supervising the $7 million redevelopment of the ramshackle premises. Fortunately it is a dry day: water apparently pours through his ceiling whenever it rains…

"I’m not Ted Noffs and I can’t be Ted Noffs," he told the board. "If you’re not ready for a change, I’m the wrong bloke."

There was the added complication of religious politics. Though the chapel was originally set up by Methodists, it now comes under the Uniting Church of Australia. To be accepted as pastor, Long had to go through the Uniting Church’s vigorous training procedure – which could not start until his suspension from Churches of Christ had expired.

Fortunately, "the Wayside board couldn’t give a flying fruit about these distinctions". He was appointed general manager and licensed to perform normal pastoral duties – baptisms, funerals, marriages and so on – until he finally qualified.

The challenge surprised him. The organisation was barely financial and the three separate buildings that make up the Wayside Chapel were a health and safety minefield. Two-thirds is beyond renovation, and must be pulled down. The board obtained planning approval for a $7 million rebuild, and launched a public appeal just before the world went into financial meltdown. So far $1.4 million has been pledged.

Most of that money is self-generated. "Ted’s vision – and it’s the same with us today – is that we don’t want to be seen as a soup kitchen. We are something which helps the community behave like a community. We want the poor to know that we exist only because of the generosity of the rich. And the rich to know that the poor are their brothers and sisters.”

Long fostered corporate ties, got celebrities to serve as chapel ambassadors, recently adapted a suite of small rooms for the recreation of under 25s – "the only drugs-free, supervised space for young people in Kings Cross" – and converted to reality the idea of three homeless young men for Food For Thought, a regular celebrity-speaking session where a changing roster of street kids prepares the food.

But at the heart is the Wayside Chapel itself. "We try to keep the chapel as a quiet, safe, sacred space. Lots of people just come here to sit and think," Long says. "Everyone falls over at some point, and everyone needs help getting back up again."

Also in today’s Herald: Don’t force us into ghettoes: Trad.

LOCAL councils around Australia have been warned they risk imposing a "ghetto mentality" on the Islamic community if they continue to oppose religious projects such as the controversial proposals to build Islamic schools at Camden and Bass Hill.

The warning was issued yesterday by the founder of the Islamic Friendship Society, Keysar Trad, as he opened a prayer centre at St Marys.

Mr Trad said the centre, which took 3½ years to be approved by Penrith City Council, will participate in a number of multi-faith and community events, such as Clean Up Australia Day.

Asked about recent controversies surrounding other developments – such as a proposal for a Muslim school at Camden and a stalled project by sportsmen Anthony Mundine and Hazem El Masri to convert a church into a mosque in Canterbury – he said their rejection would hurt his community….

I’m not always a fan, I have to say, but this piece is worth thinking carefully about.

Using the example of an attempt by Mr El Masri, a prominent Canterbury Bulldogs footballer, to convert a church in Ludgate Street, Roselands, he said some councils and residents were focusing on trivial planning issues to sink projects that would have an otherwise broad appeal.

"Generally, when you think of Hazem El Masri, if he was establishing a youth centre, most people would want to send their kids there regardless of their religion because he’s a sporting hero who could teach their children discipline and help them have sporting success," Mr Trad said.

"But it seems in that area, the conjunction of his name with the word Muslim has created a situation where council took objection to something that relates to that centre. We don’t do those things to our sporting heroes in Australia; in Australia our sporting heroes are good role models, they deserve to continue to have our respect."

The Mayor of Penrith, Jim Aitken, said there was no community objection to the new prayer centre at St Marys but said planning regulations are not the only reason some developments are delayed.

"The issues are the same in any area. Some people will be against other religions coming into our society, and other people just don’t care," he said. "You just have to keep explaining to everyone what’s going so they understand."

The vice-president of the new prayer centre, Mohammad Ruhulamin, said there would be an emphasis on hosting events that involved people outside the Muslim faith.

"If our people want to be part of the community, the community must be accessible to us," he said. "It will take some time to build relationships with people. It will not be easy."

Rather than my commenting further, I recommend you use the Islam category tag to see what I have already said. This is the 136th post so tagged!

I have been interested to see that two of The Atlantic Monthly’s writers – James Fallows and Andrew Sullivan – both cite a blog by a Canadian, Robert Paterson of Prince Edward Island (PEI), this month. In particular they refer to this entry.

This is very close to what I was trying to explain three and a half years ago in my "Countdown to a Meltdown" imagined-history article in the Atlantic. The way that everything really is connected — I recently saw a school in southern China that will be in trouble because its donors are losing money through the Madoff fraud in New York  — and that no one has "any buffer, any resiliency" is something we’ve known in theory but are only now comprehending in its daily, cascading reality. It’s worth looking at the summary for similarly uplifting thoughts.

“Countdown to a Meltdown” (2005) makes interesting reading today. It is subtitled January 20, 2016, Master Strategy Memo: Subject: The Coming Year—and Beyond.

In retrospect, the ugly end is so obvious and inevitable. Why didn’t people see it at the time? The same clearly applies to what happened in 2009. Economists had laid out the sequence of causes and effects in a "hard landing," and it worked just as they said it would.