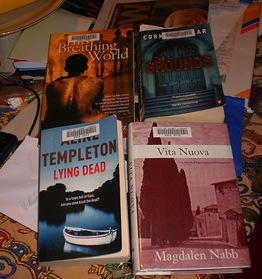 The current Surry Hills Library crop has thrown up two excellent novels (Best Reads of 2009), one just short of that but still very good, and one ordinary novel with a good plot line.

This is just delightful in every way: witty, stylish, intelligent, and a good story as well. It’s up there with the best in crime fiction, social satire, and sheer enjoyment. The author is clearly conservative, but then this has never been unusual in satire. Among the targets are the sacred cows of university “reform” and international eduspeak and corporate jargon.

‘…My new system is going to let the academics do their work, and give us all something to celebrate going forward.’

The contagious phrase ‘going forward’, used at the end of a sentence, denoted a positive mental attitude and was obligatory in all statements and interviews given by managerially minded persons.

See: Cormac Millar’s Home Page and Book Review: The Grounds by Cormac Millar. That reviewer wouldn’t know good writing if it bit her on the bum; what she deplores I revelled in!

Imagine a scribe/amanuensis in post-Augustan Rome channelling Edward Gibbon’s Decline and Fall of the Roman Empire. You can’t? You will if you read this. Yes, it’s all a bit Borges, but it is very cleverly done and there’s much lovely writing. The other setting is Harvard University in the 1960s where crimes committed in Ancient Rome seem to be resurfacing. Plays with your head, it does. Intertextuality on steroids. It is also very gay and quite amoral. So be warned. Personally I loved it, and learned along the way a lot about how authorship and writing were seen in Rome.

See: This Breathing World, where The Guardian reviewer likes it rather less than I did.

Synopsis (from the publisher): Daniela is a quiet single mother studying for a doctorate in chemistry. She rarely goes out, so her murder in her bedroom at the family’s new villa seems inexplicable. It is true that her mother, who appears to be an alcoholic; her younger sister, who has had mental problems; and her father, who has made his money running nightclubs and is probably involved in the international sex trade, are not your average home-loving Italian nuclear family, but what can she have done to be singled out for slaughter? And why has the prosecutor asked specifically for Marshal Guarnaccia to head the investigation?

I took that from Vita Nuova by Magdalen Nabb (Mystery Book Review). Very strong on characterisation and spirit of place, yet I was a little disappointed. That’s not to say it does not merit the “best read” tag.

OK, the writing is very ordinary, even at times pedestrian. The plot takes ages to take off, but once it does it is really very well executed.

While I have not always slammed everything that appears in John Howard’s favourite mag Quadrant, as searches here and here will show, I am underwhelmed by it in its various post-Robert Manne manifestations. Even so, there are good articles there from time to time, and some good stuff in the literary area. But I have spat at the mag more often than not in recent years: for example — How Martin Krygier ambushed the Quadranters…; Three magazines and an amazing AIDS story… (“You will all be overjoyed to discover that HIV does not cause AIDS. Lord Malcolm will be especially pleased, I should think, as this means he isn’t really sick at all and must have been in hospital all those times for work experience, or a vacation, and all that pain he suffers must just be imaginitis… I look forward to ‘Why the Earth is Flat’ in some future Quadrant; I think we have already had articles on why climate change is a left-wing fantasy…); Vilifying Australia – The perverse ideology of our adversary culture :: Keith Windschuttle (“Windschuttle is to the study or History what the Visigoths were to Ancient Rome. He is the hired assassin of the Culture Wars.”) A bit strong that last one, perhaps, but it rolls off the tongue well.

Now we have a story I first saw on Arthur’s blog: Keith Windschuttle has Sokal on his face. The second link takes you to the original Crikey post:

Keith Windschuttle, the editor of the conservative magazine Quadrant, has been taken in by a hoax intended to show that he will print outrageous propositions.

This month’s edition of Quadrant contains a hoax article purporting to be by “Sharon Gould”, a Brisbane based New York biotechnologist.

But in the tradition of Ern Malley – the famous literary hoax perpetrated by Quadrant’s first editor, James McAuley – the Sharon Gould persona is entirely fictitious and the article is studded with false science, logical leaps, outrageous claims and a mixture of genuine and bogus footnotes.

The Sydney Morning Herald has David Marr on the matter:

The hoax was beautifully done. Provoked by Quadrant’s embrace of global warming sceptics, the unidentified hoaxer concocted the article early last year and sent it to Windschuttle. The aim was to "employ some of Quadrant’s sleight-of-hand reasoning devices to argue something ludicrous", the hoaxer later wrote. "Something like the importance of putting human genes into food crops to save civilisation from its own ills, and how this sort of science shouldn’t be scrutinised by the media because, you know, it’s empirical."

Skeptic Lawyer comes in on the defence team with Quadrant Demidenkoed. That is all. I think she misses the point and I commented rather tartly on my Google Reader: “Given the crap Quadrant has published on things like HIV in the recent past, it deserved all it got. The magazine has been unmasked as ‘new political correctness’ rather than serious intellectual enquiry.”  This note expands on that.

I was a Quadrant subscriber in the late 1960s.

On Quadrant see Club Troppo: Who is Sharon Gould?