Many of us are watching developments with interest. This “rogue” Catholic Church has been using WordPress to get its message out: St Mary’s Community South Brisbane and St Mary’s Discussion Forum*. See also (Brisbane Archbishop) Bathersby ousts Kennedy at St Mary’s.

I had been thinking of posting on this, but would rather leave it to a progressive Catholic. Michael Bayly in St Paul Minnesota is an Australian expat whose blog The Wild Reed is on my blog roll, thanks to a tip from Renegade Eye some time back. Michael has just posted on the issue: Mustard Plants in the Hierarchy’s Garden.

…But wait! The center may be in a state of stasis and decay, but at the periphery of our living tradition we can observe sprouting and flourishing like mustard seeds, pesky* yet invigorating ways of being Catholic that are truer to the life and message of Jesus, and thus the true mission of the Church. Two recent examples are St. Mary’s in South Brisbane, Australia, and the Spirit of St. Stephen’s Catholic Community in Minneapolis, USA. (The latter is my spiritual home.)…

See also a project Michael is involved with, The Progressive Catholic Voice.

Here in Surry Hills and Redfern one immediately thinks of Redfern’s Kennedy, the late Father Ted Kennedy. There the forces for “the centre” have apparently triumphed, but again the blogosphere, among other things, keeps the dream alive. See The Church Mouse.

The Church Mouse maintains an eclectic public record of the history and curious goings on in the parish of St Vincent’s Redfern, an inner city suburb of Sydney, Australia.

This is the third major revision of the website. All of the old website content – with the exception of the Church Mouse Journal – can now be found here, and that material is being moved over as time permits. New articles are published here… 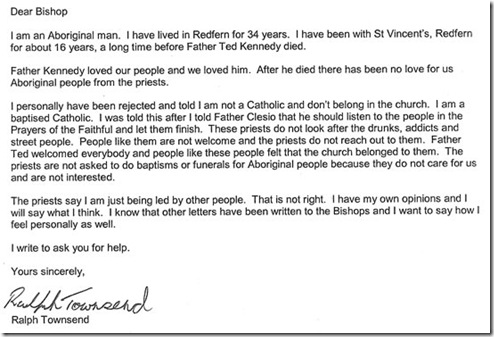 It also links to replies.

* Note these sites are being replaced by St Mary’s Catholic Community South Brisbane, a new site. The old sites carry this message: “All material from this site will be moved to the new site and this address will cease to operate from March 31 2009. You are encouraged to join the newsletter subscription list on the new site to receive our regular bulletins.”