As you may see. 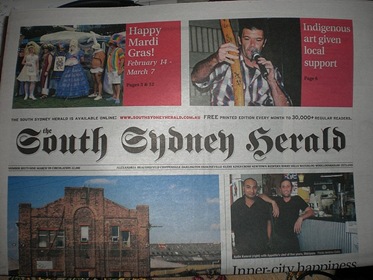 That’s my pic and story on the left (page 3) and the top left on the front page may also be familiar. 🙂

Can’t link to the paper’s site at the moment. I think it may be being redesigned.

The SSH website is available again. It wasn’t being redesigned as yet. There is a lot more in it than my small article, and while it mainly deals with local matters, you will also find something new on Zimbabwe — and more.

Here is a copy for you in PDF format: March 09 South Sydney Herald.

However you read it, this is a bad business. It is still unclear who did what or why. What is clear is that violent people in the long run do enormous harm to others – obviously – and most often do harm to their own cause. We simply do not yet know what cause is involved here. As Lateline put it:

SALLY SARA: It’s the first time that international cricketers have been directly targeted in a terrorist attack, and it’s expected to signal a halt to any further cricket series in Pakistan.
HASHAN TILLAKARATNE, FORMER SRI LANKAN CAPTAIN: Yes, because we all knew that they are so many insecurity concerns in Pakistan. I don’t know why we want to send a cricket team to Pakistan. So, as cricketers, it’s a very bad situation and we are sad about the whole thing.
SALLY SARA: The attack has also increased pressure on Pakistan to take action against terrorists within its own borders – a message which India delivered with an added sense of urgency.
VISHNU PRAKASH, INDIAN FOREIGN MINISTRY SPOKESMAN: Terrorists based in Pakistan are a threat to the entire world. It is in Pakistan’s own interest to take urgent, meaningful and decisive steps to dismantle the terror infrastructure once and for all.
SALLY SARA: The latest bloodshed has highlighted to instability and insecurity in Pakistan and its implications are expected to extend well beyond the cricket field. Sally Sara, Lateline.

Mr Prakash is jumping to conclusions. He is not alone, and we could do with less of that. Someone needs to bang a few heads together at government level on the sub-continent, and someone needs (among other things) to deliver a just solution in Kashmir, just for starters. The tragedy of partition continues, to the cost of all.*

I looked in on The Pakistani Spectator – which really is just a group blog – to see what reactions I could find there. Some are commendable: see the lead story.

On Tuesday morning, our revered Cricketing friends from Sri Lanka were attacked in Lahore, leaving the whole nation embarrassed, shocked and with our heads shaken in disbelief. With the approval of the Colombo Government, SL team decided to tour Pakistan despite security fears and they courageously defied the advice by other Cricketing nations. India was more vocal against the tour by SL team. Due to our security lapse, Tuesday shooting has helped in vindication of theri stance and has resulted in  closing doors of international Cricket in Pakistan for many years to come – the worst set back to game in its history.

Political differences, ideological distances or social restlessness, no doubt, has created chaos in our country but no such incident has taken place in our history where a sports caravan has been attacked so cowardly. Hats off to those jawans who laid their lives in a combat aimed at saving lives of the guest team.

There are many voices in Pakistan pointing fingers to India for master-minding this attack which has jeopardized the Pakistan Cricket future beyond repair. There may be ‘some’ credence in such allegations as India has emerged beneficiary of the situation in the backdrop of the acrimonious environment prevalent between two neighbours. But this drumbeat is simply out of place because we ourselves need to do some soul searching and have to admit that our security measures were insufficient…

Too true, and it is a shame about some of the other stories: Sri Lankan Cricket Team Attacked : India Behind Terrorism?  and Lahore Attack On Sri Lankan cricket team – Is It Inside Job? especially. Highly bloody unlikely, I’d say. More rational are Pakistan achieves yet another milestone – The Lahore Chapter and Who Dunnit ? Liberty Attack on Sri Lankan Team.

* I was interested to see Tanvir Ahmed making this same point in today’s Sydney Morning Herald.

…A large share of responsibility for the current chaos must be put at the door of Pakistan’s army and its Inter-Services Intelligence, or ISI. For more than 20 years, the ISI has deliberately and consistently funded a variety of Islamist groups, including Lashkar-e-Taiba, the group most likely to have co-ordinated the Mumbai bombings. The agency has long seen the jihadists as an ingenious and cost-effective means of controlling Afghanistan (which occurred with the retreat of the Soviets) and bogging down the Indian Army in Kashmir (achieved from the early 1990s).

The results have been disastrous, filling the country with thousands of armed but now largely unemployed jihadists, a plethora of unregulated modern weapons and a host of militant groups. The Islamists have followed their own agendas and have brought their struggle to the streets and into the heart of the country’s politics.

In an amusing twist, Pakistani television channels blamed India’s external intelligence agency for the attack on the cricketers. Geo, a leading news channel, broadcast old footage of the president of the Congress party, Sonia Gandhi, promising a fitting response to those responsible for terrorist acts in India.

It underscores how the disputed region of Kashmir is again in the shadows of Tuesday’s events in Lahore. It is not in the job description of Richard Holbrooke, Obama’s special representative to Pakistan and Afghanistan, but remains critical in establishing any sort of stability in the region…

Pakistan remains the prime manifestation of the sores of partition in a region that is still stinging from post-colonial headaches. It is where ancient identities and conflicts arising from them are being reinterpreted for modern conditions, a kind of Balkans with garam masala.

As its most worrying example, Pakistan, languishes next to its powerful neighbour, its impact upon our world may be just as great, albeit in an entirely different direction. 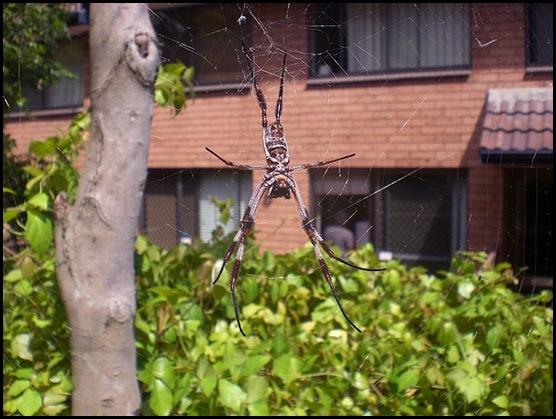 Go to Journalspace for more: Wildlife in Surry Hills.

Comments Off on Surry Hills fauna