Is that confusing enough for you?

Peter Skrzynecki’s “Immigrants at Central Station, 1951” was the subject of my tuition session yesterday. The coachee is doing the ESL course in English. On my way I took some pictures of Central from the perspective of the speaker in the poem – as I read it anyway. (We read the poem carefully so he could see why I had chosen my angles.) Of course it isn’t 1951 any more, but I do vividly remember migrant camps, and Central Station in the 1950s. What follows the poem is a sketch commentary around that HSC topic de jour — “Belonging”.

It was sad to hear
The train’s whistle this morning
At the railway station.
All night it had rained.
The air was crowded
With a dampness that slowly
Sank into our thoughts –
But we ate it all:
The silence, the cold, the benevolence
Of empty streets.

Time waited anxiously with us
Behind upturned collars
And space hemmed us
Against each other
Like cattle bought for slaughter.

Families stood
With blankets and packed cases –
Keeping children by their sides,
Watching pigeons
That watched them.

But it was sad to hear
The train’s whistle so suddenly –
To the right of our shoulders
Like a word of command.
The signal at the platform’s end
Turned red and dropped
Like a guillotine –
Cutting us off from the space of eyesight

While time ran ahead
Along glistening tracks of steel.

Peter Skrzynecki’s “Immigrants at Central Station” describes a family who with other families has just arrived in Sydney from a migrant camp in western NSW. The poem is about the poet’s own family. As well as describing the scene, the poet tells us a lot about their feeling of not belonging in this new place and their fears about the future.

Their journey to Sydney had been through a night of rain, cutting them off from the landscape they were passing through, making them feel uncomfortable, and echoing their feelings

The air was crowded

With a dampness that slowly

Sank into our thoughts –

The families each huddle together not just for warmth but also because the only sense of belonging they have left is to the family and their few possessions represented by their luggage. In this city whose cold “benevolence” has controlled their lives for years now they feel anxious and lonely. They do not know anyone in those “empty streets”. They don’t even really know where they are going next, or what it will be like when they get there. They feel like “cattle bought for slaughter” or people about to face the guillotine. They have had very little choice in life up to now. But there is nothing they can do except to accept what they are given.

But we ate it all:

The silence, the cold, the benevolence

The whistle of the departing train which had left them at Central is a “sad” sound – the poet uses the word twice. The tracks back to where they came from are also tracks into their future. Like the steel of a guillotine blade the tracks are “glistening tracks of steel”. It could be though that the last image offers a little hope, as “glistening” does suggest light. 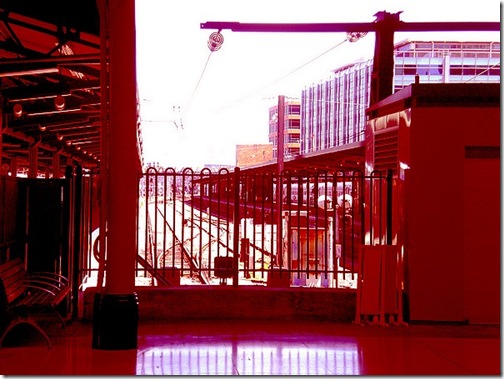