One of them is the next leader of the Liberal Party

We all wait. Amusing bits in the Sydney Morning Herald.

Turn on TV… Guess what? All our UHF channels are down!

UHF back on. And off…

Back to Internet Radio. The party room meeting is still going on…

No tweets or sms messages emerging from the party room. Must have had their Blackberries confiscated… Radio “filling in” with news of K Rudd and B Obama on Afghanistan.

Shit! Hockey was eliminated. TONY ABBOTT won by ONE vote on second round, 42-41! First vote Turnbull 26, Abbott 35 and Hockey 23. To the Right, quick march! Gerard Henderson notes the two sets of figures don’t add up…

Will the Senate Libs hold? Who knows: remember last night?

KERRY O’BRIEN: So, tell me now, how many Liberal senators do you believe feel strongly enough about this bill to vote for it?
IAN MACFARLANE: Well certainly more than nine or 10. It’s in that vicinity. There are 12 that have indicated to Malcolm that they will vote for the bill when it comes to a vote. So, I guess as I say, Malcolm is saying to them, "Well, the Liberal Party does not have a future without a climate change policy and we need to get this off the table and get back to the economy and to border protection."

Here’s how Tony did it, by appearing thus on national TV. 😉 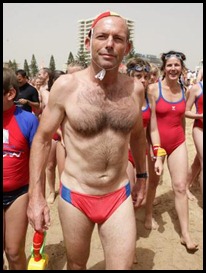 Just watched the video here of Joe Hockey after the events. I am impressed.

One response to “And the winner is… an ongoing post”