The day Scientific American, Nature or New Scientist take “anthropogenic climate change isn’t happening” seriously is the day we should concede to the Senator Minchins of this world, but that day has not yet come.

Today from the Surry Hills Library I borrowed The Complete Guide to Climate Change by Brian Dawson, Matt Spannagle (Routledge 2009).

For anyone trying to separate the fact from the fiction, The Complete Guide to Climate Change is an indispensable resource. Taking you through the A to Z of the key scientific, geographical and socio-political issues involved in the study of the environment and the implications of mankind’s effect upon it, topics covered include:Environmental Science – the Carbon Cycle and the "Greenhouse Gases"; The impacts of climate change on life, land and sea; Mitigation strategies from carbon capture to carbon taxes; The Kyoto Protocol and UNFCC; Renewable fuel sources, from wind to solar power. Including guides to the latest scientific and governmental thinking on climate change, this book will tell you all you need to know about perhaps the biggest issue facing mankind today.

It seems from Google to be getting wide distribution in libraries but no substantial reviews yet.

Posted by Neil on December 2, 2009 in climate change, environment 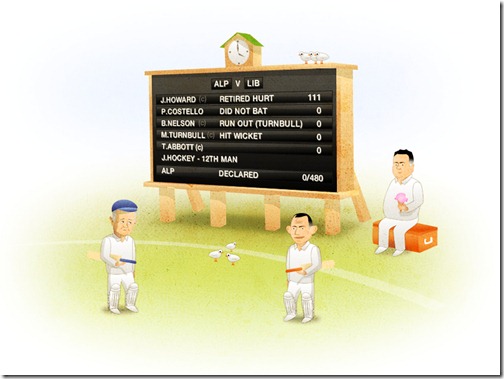 South Sydney will be at Copenhagen

Here is a snippet from this month’s South Sydney Herald.

In case you can’t read that, it says that Redfern identity Patricia Corowa is off to Copenhagen for the Climate Change meet. She has a special interest in the Pacific Island implications.

“Australia reaps the economic benefits of being the world’s highest per capita polluter, while sovereign island nations like the economically disadvantaged Tuvalu, Kiribati, Tonga and Samoa watch rising seas sweep through their houses,” she says.

As a third-generation South Sea Islander or “saltwater Murroona woman,” Ms Corowa has always had a “strong sense and knowledge of country”.

The retired Sydney airport customs officer, and grandmother of one, says she has been an Aboriginal and Islander activist since age 10, when remote Indigenous communities were persecuted by white settlers. During the 1970s Ms Corowa founded several pivotal welfare organisations including the Victorian Aboriginal Health Service.

Now living in Redfern, she is a strong advocate of climate justice for resource-poor Oceania nations and believes the Australian Government, as the dominant regional power, is bound by a duty of care for them. “I am not persuaded that there has been serious or even basic discussion about the rights of small Pacific Island nations under threat,” she says. “The situation [of many Islanders] is alarming.”

Tuvalu is one such struggling island nation. Made up of reef islands and atolls, the low-lying land is a mere five metres above sea level at its highest point and has few natural resources. With less than 100 tourists visiting annually, Tuvalu’s weak economy is heavily dependent upon foreign aid.

Yet industrialised countries refuse to adequately curb their consumption of dwindling resources or restrain greenhouse gas production, factors that could eventually result in the nation’s complete submersion, Ms Corowa argues.

Ms Corowa says the displacement of Pacific Islanders contravenes Article 12 of the Universal Declaration of Human Rights, which enshrines the right of every person to a home. “I contend that unrestrained greenhouse gas production by Australia and other economically developed countries for their own advantage constitutes arbitrary interference,” Ms Corowa says.

“When Australians sing ‘our home is girt by sea’ do they really understand that sea includes three great oceans … with Indigenous Islander societies?”