RSS
← Not quite the promised climate change post
Brer Abbott – The Ghost Who Walks? → 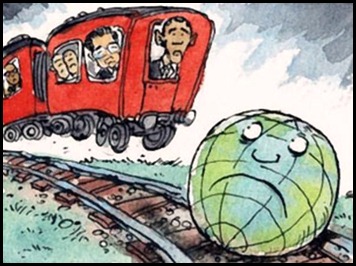 You will perhaps be disappointed as I have little original to say, but then if I had said something original you would have been foolish to have believed me as my qualifications in this area are nada, zilch and zero. Mind you, that doesn’t stop most commentators, does it? For example, in today’s Sydney Morning Herald we have John Carroll, a professor of sociology at La Trobe University, Melbourne, delivering a piece which in outline is rather like what I imagined at one stage this post might be. Professor, yes, and I’m not, but of sociology? Hardly a relevant qualification. In effect his views are no more authoritative than the vox pop I heard on News Radio this morning where one person dismissed the whole debate as analogous to the Y2K Bug. (I trust you see what is wrong with that idea.)

John Carroll makes an oft-repeated and partly true point about computer/mathematical modelling in his piece, but then Robert Hanson (not to be confused with James Hansen of NASA) points out in The Rough Guide to Climate Change (2ed 2008) that the better climate change models are tested by running them to see if their parameters would have replicated what actually happened in the 20th century, and the better ones pass that reasonable test. That in fact is rather like Kevin from Louisiana’s recent challenge, come to think of it.

Both The Rough Guide to Climate Change and the more recent The Complete Guide to Climate Change by Brian Dawson and Matt Spannagle (2009) have the advantage of being written by people with relevant qualifications. I am attracted to them too because they are resolutely unhysterical, and in the words of Dawson and Spannagle admit that “The breadth and complexity of the climate change issue makes it difficult for any single person to have an in-depth understanding of all the facets of the debate.” My second post will attempt to distil from the distillations in both books some kind of evaluation of the relative merits of the various mitigation strategies that have been proposed or are currently on the table. That means of course leaving out their arguments, but the best I can do in that regard is to urge you to get hold of the books for yourselves.

Today let’s look again at what is being called “Climategate” – the leaked emails from East Anglia. There is an Australian connection according to a story in today’s Sydney Morning Herald. Read the story carefully; it is quite a judicious bit of reporting.

… Michael Coughlan, the head of the National Climate Centre at the Australian Bureau of Meteorology, said it was difficult to comment without knowing the source of the raw data. It was unlikely to have come directly from the bureau’s centre because unchecked, raw data was rarely requested for climate analysis. The bureau had a network of more than 100 specially selected weather stations to monitor climate change, and a century of records from them had been checked.

"We’ve put an enormous effort into developing a high-quality reliable climate record for Australia and all that data is freely available," Dr Coughlan said.

But he said that if the British programmer had been using raw weather data, which is sent around the world in real time for weather forecasting, it would not be surprising that it contained errors. This raw data could have come from countries other than Australia, and would have been difficult to correct without access to information in Australia, such as the original field books.

"A computer programmer sitting in England won’t have the resources to make those corrections. I can understand their frustrations," Dr Coughlan said.

The programmer’s log is one of the most read files worldwide since the email archives were leaked. The log has been treated particularly sympathetically as it reveals his blow-by-blow frustrations, which seemed to be unfolding as his scientist colleagues, including the head of the Climatic Research Unit, Phil Jones, appeared to discuss via email ways to avoid freedom-of-information requests for raw data and to denigrate their critics.

Professor Jones, who has denied a conspiracy to manipulate global warming statistics as "complete rubbish", has stood down from his post while the university investigates the leaks.

The Herald attempted to contact Professor Jones and spoke to the computer programmer we believe to be the author of the file. The programmer did not deny his name but referred queries to the university’s media unit. Professor Jones has not responded.

RealClimate, a website run by climate scientists, confirms the log as the work of a specialist charged with upgrading data.

"Anyone who has ever worked on constructing a database from dozens of individual, sometimes contradictory and inconsistently formatted datasets, will share his evident frustration with how tedious that can be," it says.

See also Stolen emails do not support wild claims of scientific misconduct. It seems to me too that “climate change skeptics” should be careful what they wish for, as the data they themselves use may come to us with much the same processes, and indeed is often much the same data.

I refer you again to my friend Maximos62 noting he is more qualified than I or Professor Carroll, as he does at least practise in a relevant discipline: Thoughts on Climate Change after the CRU Hacking and Climategate Anticlimax.

Finally, much more comprehensive than my contributions is

1. Noel Pearson’s piece in today’s Australian is very interesting on the politics of all this.

… Political affiliations do not completely correspond with the left-right spectrum between belief and denial.

There are individuals who confound this typology because there are political leftists who are deniers and rightists who accept the scientific evidence for man-made global warming: for example, former British Conservative prime minister Margaret Thatcher, the world’s first political leader to take climate change seriously and who was instrumental in establishing the Hadley Centre for Climate Prediction and Research.

It is a measure of how the once politically neutral question of whether climate change was scientifically true has mutated into an increasingly polarised ideological war that the hero of conservatives worldwide is on the wrong side. If Thatcher were climbing on to the world stage today I doubt she would be batting for Clive Hamilton and Bob Brown’s team. She’d be opening the batting with Nick Minchin, and slogging Kevin Rudd and Penny Wong’s Carbon Pollution Reduction Scheme for sixes into the stands.

Once-mild sceptics on the centre-right are being pushed further right, recoiling from the righteousness and the moral posturing of the zealots on the left.

The believers on the left seem oblivious to the extent the religious nature of their fervour alienates potential supporters. The price being paid for the West’s progressive classes re-finding God in the environment makes many a sceptic yearn for the time people went to church for spiritual succour. Natural revelation has long provenance in Christian theology, but the Greens’ religious atheism is repellent to many.

Conversely, the fact too many on the other side are animated by a wilful obscurantism and see all things through the prism of that old chestnut, political correctness, excites their opponents on the left into paroxysms of righteous rage…

See also Lenore Taylor Emissions reduction will cost even under the Liberals.

2. See An Open Letter to Congress From US Scientists on Climate Change and Recently Stolen Emails.

Posted by Neil on December 5, 2009 in Australia, climate change, environment

← Not quite the promised climate change post
Brer Abbott – The Ghost Who Walks? →