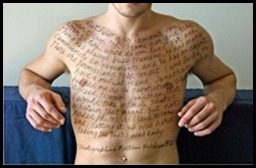 I think I’ll check that one. 🙂

William Yang has appeared on this blog before: Very rare and special: pics from M’s Chinese New Year Party 3.

2. Tony Blair and the WMD Fantasy.

So many have commented on Tony Blair’s latest admissions, but one of the best I have seen comes from the Legal Eagle blog cooperative: BLiar: Warmonger by his own admission. It’s one of DeusExMacintosh’s excellent visual entries.

…And no, I’m not just being funny. There are now grounds for thinking that the 45 minute claim – the sole direct threat posed by Saddam’s regime to British interests – featured in the dodgy dossier and heavily promoted by number 10 spin-doctors, now seems to be based on gossip from an Iraqi taxi driver that had been clearly flagged as unreliable.

3. OMG: I agree with Paul Sheehan

You don’t see that every day! Sirdan and I were discussing the current push for recall elections, which has been brought on by frustration with the NSW government’s performance in recent years. Sounds a good idea, but I had doubts and it seems Paul Sheehan shares them exactly.

As for constitutional change, switching from four-year to three-year terms makes sense for NSW. But creating the capacity for recall elections is problematic. In California, even a popular governor, Arnold Schwarzenegger, has been overmatched by the state’s structural crisis.

During a visit to California this year I saw the problem at first hand. The state constitution allows an unusually diverse array of grass-roots participation, with voter initiatives, referenda, voter ratification and recall elections. The result has created burdensome requirements on government, which should be allowed to govern.

The Herald, to its credit, has devoted a lot of space on its letters page to readers bucketing its petition for the introduction of recall elections. People think the media already has too much power.

Many also know that California is proof there is such a thing as too much democracy. They know not all that glisters in the golden state is gold.