What we have lost: 2

I would be the first to admit that Phillip Adams is hardly objective in his piece I quoted here yesterday, even if I agree with the general thrust of his remarks.

Ross Gittins has a somewhat more sober assessment in today’s Sydney Morning Herald: A vote for honesty and decency.

Wouldn’t it be great if the defeat of the Howard Government and the election of fresh-faced Kevin Rudd proved to be a turning point, a swing back to moderation in public policy and decency in public life? I am not at all sure it will – politicians tend to ape the ethical standards of their competitors – but it sure would be nice.
END_OF_DOCUMENT_TOKEN_TO_BE_REPLACED

Comments Off on What we have lost: 2

Give the speech the dignity it merits. It is a fine speech.

Posted by Neil on November 25, 2007 in Australia and Australian, John Howard

I am following tradition now, and a note on my own politics… 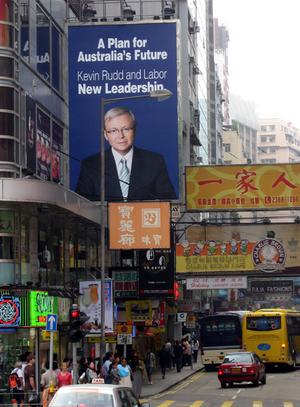 As Mark Coultan mentions in today’s Sydney Morning Herald, the law and custom in Australia is for a blackout on TV and radio election advertising starting at midnight tonight. This does not apply to the internet, but it will apply to this blog. The next thing you read here about Election 07 will be after the election. I am thus following tradition even though I don’t have to. The picture on the right just fascinated me though. Also from today’s Herald, it was taken in Hong Kong!

Guess who I am voting for!
END_OF_DOCUMENT_TOKEN_TO_BE_REPLACED

Comments Off on I am following tradition now, and a note on my own politics…

I still don’t believe there is a Christian vote in Australia as such, despite those like Family First, the Christian Democrats, and Jim Wallace’s Christian Lobby, which, along with conservative elements in the Catholic and Anglican Churches — especially in Sydney — and Hillsong, tend to attract much attention, partly because they are seen as analogous to the Christian Right in America. The Exclusive Brethren are another matter again.

I said much the same on Sunday night in reference to Sunday night’s episode of Compass on ABC.

So I was interested to find via Brian McKinlay’s Canberra  blog a survey of political parties done by a group I had not encountered before: The Centre for an Ethical Society, a mostly Catholic outfit, whose newsletter emanates from John Howard’s own electorate (Eastwood 2122).

END_OF_DOCUMENT_TOKEN_TO_BE_REPLACED

Posted by Neil on November 20, 2007 in Australia and Australian, Christianity, faith and philosophy, Kevin Rudd, Political

If you have been under a rock lately, here is the weekend’s news as seen in Canada, which has these days a government more in thrall to counter-pressures than it used to be:

END_OF_DOCUMENT_TOKEN_TO_BE_REPLACED

Posted by Neil on November 19, 2007 in Australia and Australian, climate change, environment

I have written about climate change before; my principal entry is The Great Global Warming Swindle Swindle. Now we have the full story at last from The Intergovernmental Panel on Climate Change. John Howard: The world isn’t coming to an end tomorrow… That quip I found hollow, given his late “conversion” and the marked tendency until a very short time ago — continuing in some cases — for so-called “scepticism” to dominate his side of politics, especially through their prominent culture warriors: Timmy, the Clown Prince of Climate Scepticism, for example, and Miranda…

Comments Off on Not just Oz Politics

Quite literally incomparable, as I argued a month ago: Interrogating the unemployment figures.

I return to this chicanery again after beginning Shelley Gare’s The Triumph of the Airheads (2006), reviewed there in Quadrant, John Howard’s favourite magazine. I agree with 60-70% of what Gare presents; there are issues where I think she has been a bit airheaded herself, but others — the majority — where she is spot on. One such issue is the unemployment statistics.

As for the unemployment figure…, it’s worth noting that, statistically speaking, you are counted as employed if you have worked for an hour or more in the week for pay, profit, commission or pay in kind. Or you have worked for an hour or more, even without pay, on a family farm or in a family business. [Officially, an unemployed person is someone over fifteen years of age, who has not worked at all in the week counted, has actively looked for work in the previous four weeks and is available to start work.]

END_OF_DOCUMENT_TOKEN_TO_BE_REPLACED

Comments Off on Our incomparable unemployment figures

Credit where it is due

You will have gathered that I take a very dim view indeed of the push towards privatisation that I think is quite clearly a part of the Australian government’s education agenda, so I was pleasantly surprised by the lead political story in today’s Melbourne Age: Top private schools lash PM’s policy.

END_OF_DOCUMENT_TOKEN_TO_BE_REPLACED

Posted by Neil on November 14, 2007 in Australia and Australian, education, John Howard

Blind Freddie can see who this favours

You did note this during the Big Free Lunch, didn’t you?

Let me now turn to the crucial area of education. The Coalition has a distinctive approach to education policy, with a clear focus on choice, high standards and greater national consistency. Unlike our opponents, we have never had hit-lists of independent schools.* Unlike our opponents, we have always believed in the unconditional right of Australian parents to choose the nature and the quality of the education they want for their children. We are unashamedly the parties of parental school choice. The blossoming of low-fee independent schools in the last decade, which we have supported, has given many families for the first time real choice over the school to which they send their child. Choice is a vehicle for driving better school performance across the board because it empowers the consumers of education services and that’s the students and the parents. Today I announce a policy that will further increase choice and improve education opportunities by helping parents make the investments in their children’s future that matter so much. I know that for many parents this is the most important investment of all but, of course, they face many competing pressures on the family budget and so a re-elected Coalition Government will introduce a new tax rebate for education expenses including, crucially, school fees.** This will apply for every student, beginning with preschool – that’s kindergarten in some States – until the end of secondary school. Parents will be refunded up to $400 annually for each child at primary or preschool and they will be refunded up to $800 annually for each secondary school student. END_OF_DOCUMENT_TOKEN_TO_BE_REPLACED

The myth of the economic credibility of the Liberal Party

That is the latest post on Bruce’s blog. Bruce gives a hat tip to an earlier entry here; I in turn refer you to his post. Given this is the last ditch the government has to stand in, Bruce does us all a service with his analysis.

A summary of Week 4 from Crikey Media
END_OF_DOCUMENT_TOKEN_TO_BE_REPLACED

The treasurer is mainly pretence

The Reserve Bank has raised the official interest rate by 0.25 per cent to an 11-year high of 6.75 per cent.

Surprisingly, a central question in the third last week of the election campaign is: what’s the role of the federal treasurer? If you think it’s to manage the national economy, that’s what you’re meant to think. But although the politicians on both sides want you to believe it, it hasn’t been true for a long time.

“With few macro-economic policy levers to pull in Canberra these days, any modern treasurer’s job often resembles Head of Government Marketing – Economic. That is, it’s at least as much about absorbing incoming economic news here and abroad and providing upbeat economic commentary for public consumption, as it is about making macro-economic policy,” he says. “On a typical day, the job is to explain that everything is going very well, and ‘that’s because of us’. And, if everything is not going well, ‘it’s not our fault’.”

If, as expected, the Reserve Bank raises the official interest rate today, we’ll see Peter Costello doing a weird dance in which on the one hand he declines to accept responsibility for the rate rise while, on the other, claims to be far better qualified than Labor to guide the economy at a time when inflation and interest rates are rising…

END_OF_DOCUMENT_TOKEN_TO_BE_REPLACED

Honesty and decency in spades!

One of the finest things I have read this election season is Australian Muslim lawyer Irfan Yusuf on Peter Andren. As one commenter says:

I salute you for your honesty and courage. Not all Liberals are cut from the same cloth as Howard,Costello,Downer and Ruddock. Indeed there are many decent, sincere and well meaning individuals within the ranks of the Liberal Party. You Sir, appear to be one of them. It is just unfortunate that under the control of Howard, the Liberal Party has lost sight of its roots and been dragged to the hard right.

I will give you a taste, but urge you to read it all. END_OF_DOCUMENT_TOKEN_TO_BE_REPLACED

Comments Off on Honesty and decency in spades!

The government and the economy: myths or facts?

Since in the last weeks of the election the big thrust of the Howard TEAM will be that they alone can be TRUSTED with the ECONOMY, I am all in favour of those who question this gospel.

Take this site, for example: 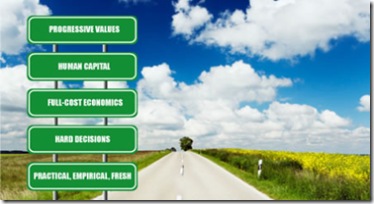 Especially see this entry: Prosperity and Fairness – An evening with Andrew Charlton.

END_OF_DOCUMENT_TOKEN_TO_BE_REPLACED

Comments Off on The government and the economy: myths or facts?

Posted by Neil on November 4, 2007 in Australia and Australian, John Howard, Political

John Della Bosca, the NSW Education Minister, has a point.

DESPITE promising 100 new technical colleges across the country the Federal Government has failed to provide even half of the eight it promised for NSW before the last election, the state’s Education Minister, John Della Bosca, said yesterday. Just three had been established and they had secured just 20 per cent of the overall enrolment target, he said.

“One was an existing private school and another contracts the local TAFE to provide its entire vocational program,” Mr Della Bosca said. “A fourth college at western Sydney is not recognised by the independent Board of Studies because it does not have registration as a separate non-government school. The other colleges have failed to get enough teaching staff onto AWAs to open their doors.”

Mr Della Bosca said the Hunter college had attracted 134 students, and the Illawarra facility 37 students, with all its training delivered by TAFE…

Margaret Gardner, vice-chancellor of RMIT and president of the Australian Technology Network of universities, said the technical colleges were not the solution to the skills shortage and were an unnecessary duplication of private colleges and TAFE.

Hatred of the Australian Education Union and the state education unions which serve the existing TAFE institutions seems to me more than part of the government’s agenda. It can’t be objective rationality that has taken them down this wasteful path.
END_OF_DOCUMENT_TOKEN_TO_BE_REPLACED

Posted by Neil on October 31, 2007 in Australia and Australian, education, industrial relations, Political