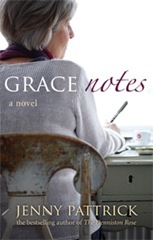 I read and greatly enjoyed Millar’s second novel The Grounds in January. I was glad to find his first novel which was alluded to time and again in the second, although The Grounds also stands alone quite well. I have to say I enjoyed The Grounds more, though I still rate this clever novel ***** and add it to my best reads of 2009. For more on Millar go to that January entry.

The title is literal as well as figurative. There are some high praise grabs from some famous people on the covers and fly leaf, but The Name of the Rose this isn’t. It is not without interest in its portrayal of the medieval mind, but I do tend to agree with this blogger.***

This one is from New Zealand. The central characters are all in their eighties. Occasionally Grace Notes is a little cloying, but generally speaking it is very witty and often insightful. Some episodes are quite brilliant, and it did retain my interest. Pattrick captures voice very well. I couldn’t but compare the manners portrayed as reflecting an Australia (in my experience) of long ago, but imagine there are parts where the New Zealand portrayed in Grace Notes would still apply here. It is a very warm and genuine book. I was reminded a little of McCall Smith. ****

This is from India. I can imagine many Indians may find her offensive. In The Nation (May 2004) is a profile of Shobhaa De titled The Maharani of Muck.

Shobhaa De, perhaps better known here as the Maharani of Muck or the Princess of Porn, is India’s most commercially successful English-language author. It’s a crazy claim for a 56-year-old middle-class Indian woman–one who describes herself as a "traditional" mother to six children–to be able to make. But sex sells, even in one of the world’s most socially conservative countries. Bucking all convention, for years De has dared to write lusty, shocking sex scenes, and from a female point of view. In a country where women rarely bare more than two inches of leg and hardly ever file for divorce, she writes about women who, like herself, flee marriages because they are bored. De is author of more than a dozen titles, all of which start with the letter "s" (Sultry Days, Starry Nights, Strange Obsession–you get the point) and all of which depict a level of privilege that most of India’s more than 1 billion impoverished masses cannot even imagine.

The India De knows and writes about is also a far cry from the India pictured by most writers, that of abject urban poverty or quaint village life. "My books put an unflinching gaze on upper-middle-class India," she says. "It wasn’t done before, mainly because we didn’t have writers out of that class." Although her readership represents but a tiny fraction of India’s population–only about 2 percent of India reads English–De’s books are consistently bestsellers, which means they sell between 20,000 and 30,000 copies. Those sales figures sound meager, but they make her Penguin India’s star, and the publisher can’t get enough of her. This year Penguin is repackaging her entire oeuvre in a sleeker format to position her better in the mass market. De’s editor, Karthika Menon, is especially enthusiastic about her second novel, Starry Nights, which she calls "near classic in its freshness and vitality." …

Shobhaa De has a well-rehearsed rebuttal to the criticism that she writes only for the elite: "I don’t have to go live in a slum to prove that my heart bleeds for anybody. There’s no point in me writing for the poor because they are illiterate." De is well aware that, in addition to being the most popular English-language writer in India, she may be the most hated as well. She once boasted that she had received a record number of bad reviews–165–for one book. But she now says that writing forthrightly about sex, as she did in Starry Nights, was a childish rebellion against the strict protocol for women’s behavior in India. "The bad press was just something that acted like a prod to see how far I could take it, and I really didn’t give a damn."…

Oh dear, I am – and to my cost rather too often

I saw this personality test on Creative Spark: Analytical, Witty and Generally Anti-Social. So I thought I would have a go. 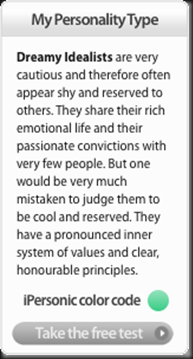 That’s the result. Click on it to learn more. A bit flattering though. Dozy git is a better summary…

Comments Off on Oh dear, I am – and to my cost rather too often

Posted by Neil on March 3, 2009 in diversions, personal